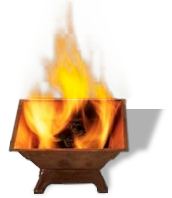 In the ancient scientific tradition of the Vedas the following is said about Agnihotra:

Just at morning Agnihotra time all the electricities, energies, ethers are attracted to the pyramid in its shape. At sunset these energies are thrust out in the same shape.

This flood of subtle energies carries music with it. The morning Agnihotra Mantra is the essence of that music. It is the quintessential sound of that flood. If you then utter these mantras and put the rice mixed with ghee into a copper pyramid of fixed size and shape, then a channel is being created through all the atmosphere and Prana - life energy - is purified.

Tremendous amounts of energy are gathered around the Agnihotra copper pyramid just at Agnihotra time. The pyramid is the generator, the fire, the turbine. A magnetic type field is created, one which neutralises negative energies and reinforces positive energies.

When Agnihotra is performed, the Agnihotra smoke gathers particles of harmful radiation in the atmosphere and on a very subtle level neutralises their radioactive effect. Nothing is destroyed, merely changed.

Much healing energy emanates from the Agnihotra pyramid.

When the flame goes out the energy is locked in the resultant ash. This ash is used for preparing various folk medicines.

Therefore, by regular performance of morning and evening Agnihotra, you create a positive energy pattern on all levels.

How do these effects come about?

Recently more studies are being carried out or being planned to understand better how these beneficial effects of Agnihotra and Homa Therapy on all environment come about.

From one American scientist we learnt the following:

„Pat Flanagan suggested a physical explanation for the depolluting effect of the Agnihotra smoke, pointing out that its colloidal molecules of ghee and cow manure could chelatingly attract and grab pollutants in the air, the way water is purified by being flocculated. The seized molecules, he added, as they settle on the ground would alkalize the soil; and if they came into contact with a plant they would stick to the leaves and act as a time-release foliar nutrient. Physically, because of the ghee and the manure, the smoke would be electrically charged. (Quote from Tompkins/Bird, Secrets of the Soil, New York 1989)

Modern medicine is still at the beginnings of examining these propositions. More about this can be found under "Science". The traditional knowledge of the Vedas has many propositions as to what effects Agnihotra has in different fields.